I love, love, love, love Thai food! I am not joking when I say that I could eat at a Thai restaurant every day, twice a day. I'd eat Thai food for breakfast, if they were open then!
I've been less busy at work the last few weeks, so have been indulging myself by going out for lavish Thai lunches!
Here are some of the mouthwatering treats I have enjoyed: 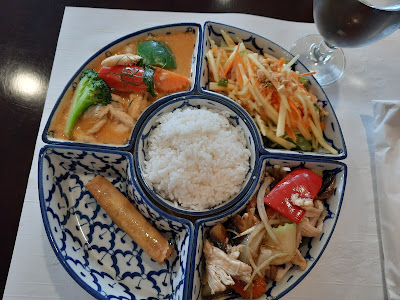 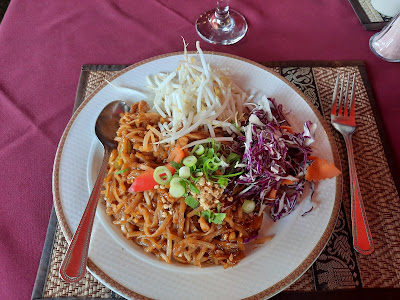 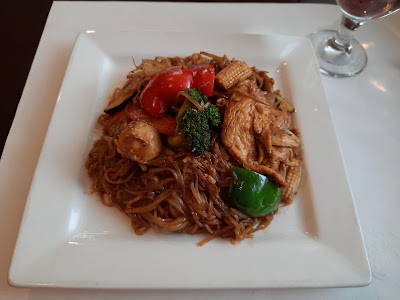 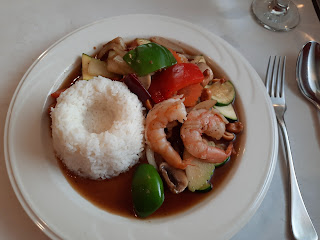 Shrimp stir fry at Talay Thai - tasty, but not quite as dreamy as some of their other dishes. And those dried chilies added no heat at all! Cute mould for the rice, though. 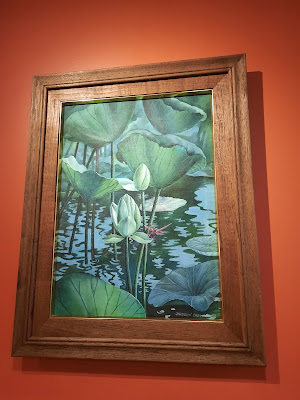 Lovely art on the walls at Talay Thai!
One reason I eat out at Thai restaurants so often is because I just can't reproduce the flavours at home. Good Thai cooking requires a seasoned wok that can get really, really hot. That requires a gas stove. I don't have a gas stove, so every Thai recipe I make is just a pale approximation of the restaurant stuff.
And, I must say, I am sure that there is some secret ingredient that Thai restaurants use...some ingredient deliberately left out of every Thai recipe on the internet and in print!
I think I may now know what it is... 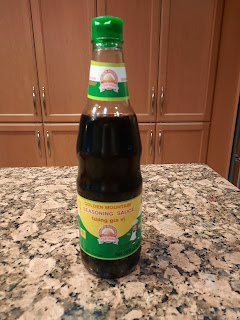 The secret ingredient?
Any problem you have, any vexing question, any hobby, you can just turn to social media! I recently joined a Facebook group called 'Authentic Thai Cooking'. Now, the question of 'authenticity' is questioned by foodies (can any food be truly authentic? And if not, who cares?!), but the group has been really interesting, and I've learned a few tips. One member posted a photo of this sauce and I wondered if it was the secret ingredient I've been missing all these years...
I've heard about it before, and searched for it at local Chinese grocery stores (Kowloon, T&T, etc), but never found it. This time, I hustled over to Amazon.com and ordered it. It was pricey - $15! - but that's less than a combo plate at Talay Thai! (for the record, the combo plate at Chez the Thai was the most expensive, and also the smallest - ahem!).
The sauce came asap, so I bought me some chicken breast and prepared a stir fry! Well, I didn't have any chilies or basil, but I still tried to make an approximation of chili-basil chicken. How did it come out? Well, I used too much chicken stock, so it came out far too salty, but I could detect a hint of that amazing aroma that I get at Thai restaurants. I'll experiment with proportions, but I may be on the way!
Mī khwām s̄uk̄h kạb kār kin!
Posted by Ms. Foodie at 9:30 PM No comments:

Yes, it's been six years. But you won't hold that against me, right?

Alrighty then, on to the post - let's talk about Christmas parties!

Christmas is a time to savour delicious treats and special flavours. I also take this time to try out new foods from different cultures. For the last few years (prior to the pandemic) I have hosted Christmas parties with different themes: Italian, Scottish, Greek, and, in 2019, Scandinavian!

To prepare for the Scandinavian party, I researched the food and culture of Denmark, Finland, Sweden and Norway. While each are distinct in important ways, there are also commonalities of flavour and ingredients. Chief among these is, of course, fish and shellfish - pickled and smoked, and various meats. I also associate pickled vegetables, cheeses, creamy sauces, and hearty breads with Scandinavian cuisine.

Then it was time to get eating! I went to the Danish Christmas Bazaar at the Ron Kolbus Centre in November 2019, and savoured delicious open face sandwiches, sweet breads and cookies. To my delight, at the white elephant sale I was able to buy vintage Danish tablecloths, a wall hanging map of the country, a wooden Danish flag, and children’s boardgames. 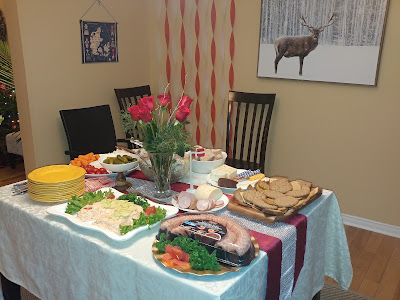 Gaze upon the noble moose...and that fish mould!
Next it was time to visit that icon of Swedish food – Ikea! There I bought gingersnap cookies in a pretty red and white tin, candies, kalles fish caviar, lingonberry jam, and crackers.
I go all out for my parties, so I redecorated my dining room with Scandinavian themes. At Home Sense I picked up a large, framed photo print of a moose in a winter scene. How iconic! I also bought stark white branches, and put them in a tall, galvanized steel vase, for that minimalist Scandi style. The Danish flag is red and white, so I hung red and white streamers and put up red and white balloons. For the children, I printed colouring pages with a map of Denmark, and images of Danish kids in traditional costumes. I also bought red felt and ribbons, so they could make a heart shaped craft. That was a little tricky, but the kids had fun. 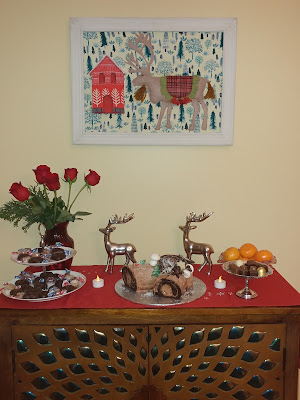 Can't have too many sweets...or too many caribou!

When planning the food, a key challenge facing me was how to prepare a party spread with vegetarian foods. Most of my friends are vegetarian and Indo-Canadian, so I had to modify several foods, so they were vegetarian but still featured Scandinavian flavours. Pickled vegetables, bread, cheese and crackers were easy, but how to capture the other rich and robust flavours of the region? Happily, Ikea now produces vegetarian balls, so I picked those up. I associate caraway with Scandinavian cuisine, so I also made a beet salad with sour cream and caraway seeds. It looked very pretty, all pink and creamy, in a round white dish.
But of course, I had to have fish! I had a shrimp ring, and, for the centrepiece of the table, made a large salmon and dill mousse, in a fish-shaped mould. Smoked salmon on potato patties, and slices of cooked sausage, rounded out the non-vegetarian items.
It's nice to have finger foods, but I also like to serve a hearty dinner during the party. Again, this had to be vegetarian, so no meat stew! Instead, I fried up fennel, onions, potatoes, parsnips, and white beans, to make a vegetarian stew. I added red pepper strips for colour and, because my friends are Indian, it had to be flavourful! I put in lots of smoked paprika, pepper and, again, caraway seeds for that distinctive flavour. I served this with brown rice for a satisfying but simple dinner that was easy to eat while mingling and chatting.
What to drink? Glogg of course! When guests arrived, they were treated to the fragrant smell of red wine, cinnamon and cloves simmering in a crock pot. I couldn’t find Aquavit, but a friend showed up with a bottle. We toasted the holidays, the beauty and flavours of Denmark, Sweden, Finland and Norway!
Posted by Ms. Foodie at 6:44 PM No comments: