There have been major developments in Ms. Foodie's life, the main one being moving to a house. A big house! This is great in so many ways - mainly that now I can indulge my little heart in doing lots of entertaining. I quickly discovered, however, that lots of entertaining means...lots of cleaning up, cooking, shopping, and then cleaning up afterwards! Oh well, it's worth it! Accordingly, let me present the first of my long dreamed-of entertainments - an Italian dinner al fresco! 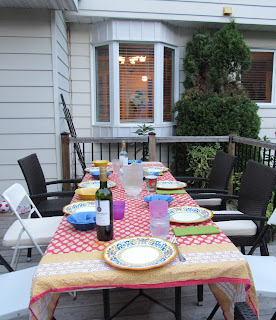 The long table was set. I have been reading Under the Tuscan Sun by Frances Mayes, a wonderful book set in Italy that is nothing like the movie. In the movie, the romance is between two people - in the book, it is a three-way love affair between Mayes, her boyfriend, and a 200-year old villa. And what a passionate affair it is! I am so glad that Mayes renovated the villa, because now I never have to - like any love affair, it sounds exhausting!

She set up her long table under a linden tree. I have no linden tree, but thought this looked charming too. 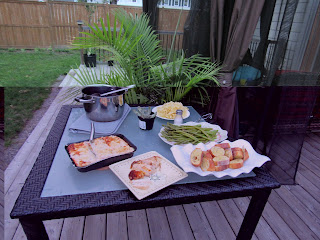 This photo shows the magic of the whole affair rather better - I put up palm trees all around the lovely big patio, and a Moroccan carpet in the gazebo. I fancy it gives the whole place an exotic feel - all in the suburbs of Ottawa! 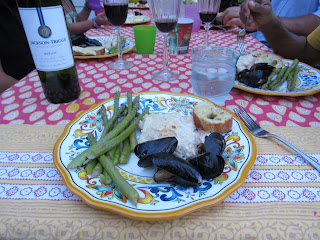 All well and good, but what did we eat?? Well, I went simple - a store-bought seafood lasagna, baguette, asparagus, and mussels in white wine and garlic. Simple and yum. The appetizers featured smoked salmon, so we truly ate the ocean that night.

Dining alfresco was so lovely. Truly, Italians do it better!

Buon proveccio!
Posted by Ms. Foodie at 9:37 PM No comments:

What, you want even more cake?

My children's school had a carnival lately, and there was a silent cake auction! We had glorious plans of making a mermaid-themed cake, complete with an island and pirate ship. The children argued over it for quite some time. In the end, it remained just a beautiful dream. Oh well. At least I donated some books (with underlining - eek!)

I did, however, head over to the carnival with a fist full of money, ready to spend!

Heheh, no. Sorry kids, the line up was too long. First priority was the book sale! I got lots of great books and some fun toys.

After that it was on to the bake sale! I ogled the cakes in the silent auction: 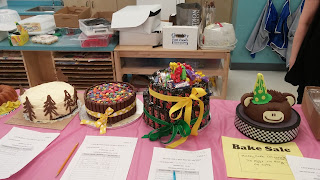 I love these parents! So colourful and inventive!
Last year there was a "dirt cake", complete with gummy worms! 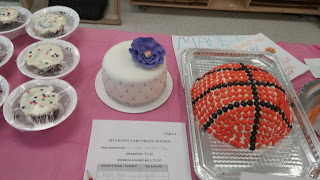 My favourite was this purple flower sparkle cake. So beautiful!
Beside it is a basketball cake! 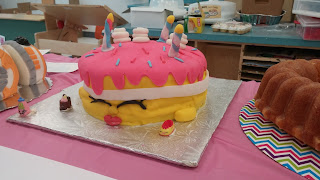 Shopkins cake - adorable! (but is her face supposed to be SO squished?)

Ah, lovely, lovely cakes. I bid on a few but, alas, was outbid. I suppose it's okay, as I had no party planned, and getting through a cake on our own would have been a bit of a chore. (Silent auction cakes look good, but invariably are made with hydrogenated oil frosting, which has less charm than people seem to think).

I did, however, get some Chinese turkey dumplings and an ice cream cone cupcake.

And, later on, the kids did get their cotton candy (phewf!)

Keep on munching!
Posted by Ms. Foodie at 9:43 PM No comments: