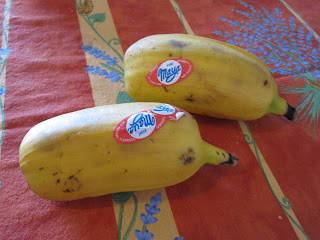 Produce Depot at Carling and Maitland is my new favourite store. I find that when I shop there, I buy less processed food (because there is less of it available, évidemment!). Furthermore, because there is so much gorgeous produce to gorge upon, I tend to buy more fruits and vegetables than when I am at Loblaws (supermarket chain). This plethora of fruits and vegetables means I am forced to cook "from scratch", which is healthier, and cheaper. Wonderful!
As I mentioned in a previous post, they also have lots of exotic fruits and vegetables to titillate my thrill seeking palate. On a recent foray, I came upon some exciting looking "Hawaiian Plantains". Now, they often have plantains, green, deep yellow and even blackish ones, but somehow they never pushed my buttons. But the shape of these Hawaiian ones was so unusual that I had to try them. The shape reminds me of banana blossoms, which is something else I want to try cooking sometime soon.
These plantains were a nice yellow colour, which meant they were ripe for cooking. Further research on the internet suggested waiting until they got really black, as then they are even tastier, but I wanted to cook up my Hawaiian plantains ASAP. I have a (somewhat warranted) reputation for letting produce rot in my household (at least, so my husband claims), and that charge is doubled when it is something exotic I haven't cooked before. I bought these on a Saturday so, the very next day, I readied my apron and my pans for a cooking spree.
I haven't eaten plantains often - just twice in fact! The first time was at university, when a fellow student from Jamaica made them at her home. The next time was at Yre's Exotic Chicken BBQ on Charlotte St, just off Rideau (another major street in Ottawa). Both times the plantains were deep fried oily, sticky and sweet. So I decided my plantains had to be the same. Plantains are the usual accompaniment to African and Caribbean foods like jerk chicken and other grilled meats. It may seem odd to have a sweet side dish for these foods, but somehow the flavour combination works, and is eminently delicious.
I googled a few plantain recipes, and decided to fry mine in a little more oil than I usually use, then to douse them in honey. They got all soft and goldeny. With the honey they got sweet and gooey, with a bit of a caramelized crust. Tasted incredible out of the pan. Had to exercise immense self control not to eat all of them before dinner was ready. 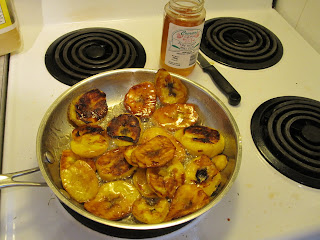 After this I made Chinese fried rice, then lamb meatballs. Had some chili-garlic sauce as an accompaniment. Was nervous the flavours of these eclectic items wouldn't go well together, but my husband liked it and enthusiastically dug in. 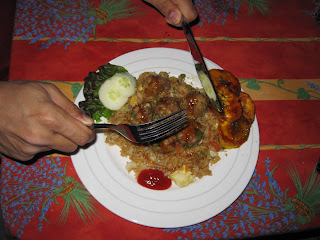 Later, he declared that he doesn't like fruit that has "had things done to it" and, after a few pieces of plantain, wouldn't eat any more. I pointed out that plantains are not eaten like a fruit, but as a starch. I didn't protest too strongly, though, as I was more than happy to appropriate his plantains. My kid didn't like them either, which made me sad. But hey, that meant more plantains for me! Yum!!
Posted by Ms. Foodie at 10:39 AM 4 comments: 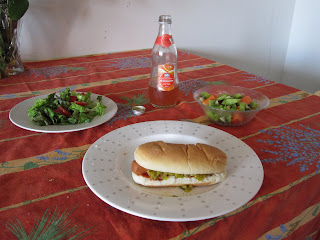 It's springtime at Carling Avenue, and you know what that means - hot dogs!
Yes! For me, summer and hot dogs are inextricably linked. And back in April we had some really hot, sunny weather that it made my mouth water for a hot dog! I don't know where this craving came from - growing up we didn't eat hot dogs too often, and never from those enticing street carts (mystery meat doesn't go over well with Hindus); all I can say is that when the weather reaches a certain pitch, and the sun is at its zenith, I'm quite delighted if I can dig up some weiners, a bun, and some not-too-aged relish. Then I sit on the balcony, the sun in my face, and dig in.
I'm a mustard and relish kind of gal. I need ketchup, bien sur, but there must be lots of mustard and relish. Over the years I've perfected the art of distributing the ketchup, mustard and relish so that I get a bit of each condiment in every juicy bite.
My meal, above, is notable not just for its condiment perfection, but also for being entirely gleaned from the shops around Carling Avenue! The vegetarian hot dog, bun, salad fixings and fruit (papaya and kiwi) are from Produce Depot (my new favourite store), and the soda is from Shopper's Drug Mart. It looked quite enticing - "European Soda frizzante", flavoured with blood oranges. Who could resist? Alas, it tasted just like Orange Crush, albeit a bit less sugary.
No matter, it tasted just right with the hot dog, the accompanying fruits and vegetables made me feel virtuous, and with the warm sun on my face, it made for the perfect early summer meal.
Posted by Ms. Foodie at 9:23 AM No comments: