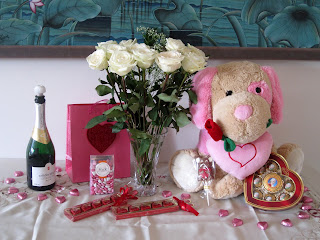 Well, my favourite holiday has come and gone and, as you can see, I celebrated it in style! Yes, as I have previously mentioned, I love pink, and Valentine's day is the best time to celebrate pink - in all its gooey, fluffy, plush & tinselled glory. Plus it's also about chocolate, and flowers, and cards covered with little hearts...I love it all!

I especially like Valentine's day because, unlike other holidays, there's no pressure. If you want to go all out with candy, flowers, a romantic dinner, expensive jewelry, etc, you can. But if you just want to grab a box of cheap chocos on the way home from work and order a pizza with your loved one, that's all right too. And if you want to fall in line with the legions of Valentine's haters and be mean to everyone that day, nobody will begrudge you that right (as long as you give them some Easter eggs later, to make up for it!).

This is in sharp contrast to holidays like Christmas, Thanksgiving and Easter where one has to get together with family, clean the house, produce a big meal, observe piles of traditions, play nice, etc, etc. Now that's work!

So as you can tell, I'm a big fan of Valentine's day.

This year I started my Valentine's day preparations early. This was in part because Valentine's stuff started seeping into the shops around mid-January, just as the tired Christmas merchandise was being slashed to half-price, and in part because my son is in daycare and I wanted him to have Valentines to hand out to his little cohorts. It would have been horrifying to me had he received Valentines, with none to hand back (yes, you can see Valentine's is important to me!).

I wanted (somewhat) non gendered Valentines, so I passed over the superhero and the fairy ones, and instead got some Disney themed ones with cars, fish, and mice on them. Then, at Loblaws on Richmond Rd, I got a box of little cherry créme hearts covered in pink foil (they had to be pink!). I taped these to the Valentines. So cute! My son got a fair share of them to gobble, too. On Valentine's Day I used them to decorate the table, to delightful effect, I think. 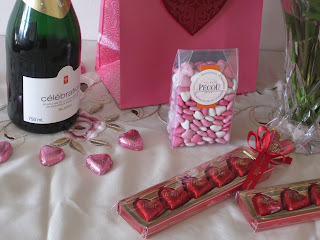 A table full of pink prettiness

My next stop, and where I really went crazy on the chocos, was at Carlingwood Mall. This nondescript mall, smack dab on Carling Ave, is populated mostly by senior citizens (you really have to watch them in the parking lot!). They like to wander around and smile at people's babies. There's even a senior's mall walking club! When I was fifteen I worked there in a shoe store and would sell the ugliest (but expensive!) orthopaedic shoes to them.

Now I go there to drool over the most delectable, scrumptious, prettiest cakes in Ottawa - at Swiss Pastries! This store, "Home of the original Black Forest Cake" is iconic for me. Growing up, we would always get a Black Forest Cake for family birthdays. A future post will dwell on this wonderful store at greater length...for now suffice it to say that, after three consecutive parties where I was forced to eat cheap, hydrogenated oil icing cakes, I was desperate for some good cake! So I went to Swiss Pastries looking for a small Black Forest Cake to enjoy for the pre-Valentine's day weekend. Well, they only had a medium sized one so...

But at least it was 10% off!
With the money I saved (a full $2.30) I decided to buy some of the beautiful European chocolates they also had for sale. Well, $40 later I had a box of Mirabell Mozart praliné chocolate balls from Austria, Heidel Praline hearts from Germany, and pink multicolour Maison Pécou chocolate hearts from France (my son picked these out - it was none of my doing!) So droolworthy...

The Heidel chocos actually touched a chord with me, because I bought one of their plain chocolate bars in Frankfurt airport when I was on my way to India. It was tasty, so I wanted to see how their pralines were too. That's a good reason to buy something, right?

And as for that cute little mousey you see in the photo below...well, a few days later, I found myself at Café Délice on Kent St., in downtown Ottawa, where they sell the most delicious Leonidas Belgian chocolates (gee, how'd I manage to wander in here??). While blissing out on some of their fresh cream filled pralines, I fell in love with this little mouse lollipop for my son. I was sure that when I gave it to him he'd say "oooh, t'ank you!" in that adorable little voice of his (he more or less did). 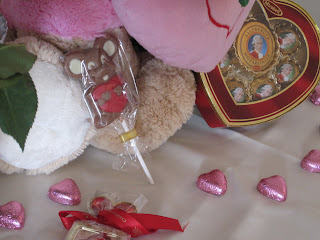 What else would make a Valentine's day smorgasbord complete? A plush toy, of course, and a bottle of bubbly!

But this bubbly, unlike what most enjoy on Valentine's day, was non-alcoholic. Can any of you guess why? That's right, Ms. Foodie is pregnant! Yay!

So that's why I've been AWOL for such a long time on this blog. The exigencies of work, combined with the inability to stay awake past 9:30 pm, have all combined to make blog writing impossible (I used to do all my blog writing late at night, after my son fell asleep).

So in the short term, blog posts will be like hen's teeth for you, my dear readers. But stay faithful and check back every now and then. In a few short months I'll be off work and I can resume both my foodie ramblings and my food shop forays.

(and hope you had a fun Valentine's day too!)