Back to (paid) work

It's a wonderful time to be living at Carling & Bayshore. The air is full of drifting poplar fluff, the trees are lush and leafy, the golden sunshine warms the skin, and flowers and blossoming trees scent the air. And the bay - oh the bay! Britannia Bay is blue and sparkling, and the white sails of the boats float lazily by, inspiring countless dreams of travels to far away lands...

But my time to enjoy all these delights is down to just a few hours a day as, alas, I am back at my job. Yes, I have been swallowed up into Ottawa's federal bureaucratic infrastructure, and it's back to cubicle land for me. At least the days are long, so my little baby and I are enjoying the playgrounds and parks in the evenings (and are discovering new ones all the time!)

However, my free time is now even more squeezed and my blogging time much reduced (in case you hadn't noticed by the duration between my last few posts!). So I am writing to let you know that my service standards are going down - I will now try to put up a post every two weeks instead of once a week. But fret not - my posts will still have the same rambling charm and feckless disregard for brevity that have characterized my blog up to now.

Keep on munching!
Posted by Ms. Foodie at 1:22 PM No comments:

Moving to a new place is such a disorienting experience. Even if it's an area you know well, it still feels as though everything is seen from a new angle. Zipping down a street in a car gives a far different impression than walking through it slowly with a baby in a stroller. In a new place, every stone, bush and passing pedestrian are notable and demand careful scrutiny; even the cracks in the sidewalk are something to be contemplated. Establishing new signposts and paths take time, and everything feels foreign and mysterious.

It was in this spirit that I found myself gazing upon the red neon sign of "Mr. Pie & BBQ" during the first few days of our residency at Carling & Bayshore. I found the name intriguing - what did it mean? Who was this mysterious Mr. Pie? Who would call himself Mr. Pie? Was he an older man with a white moustache and thick sideburns? Did he walk with a limp? And what about his sidekick BBQ? Was he perhaps a youngish fellow with a shaggy hairdo, faded plaid shirt and ripped jeans? What had brought these two unlikely souls together?

And what kind of shop could it possibly be? A hardware store? Drycleaner? It was open late, so that suggested some nefarious purpose; perhaps a bar or some gang hideout. But then reason reasserted itself; if the store had a nefarious purpose it would not be placed on a busy street with neon signs. So then, it likely served some gastronomic function. Yes, that was it. So it was food related. But what?

After mulling it over I decided it was a Korean BBQ. "Mr. Pie" sounded like an anglicized version of a Korean name and, from a lack of imagination, he had tacked on the BBQ bit to denote his specialty. I was excited. I like Korean food and envisioned bright red kimchi bits, smoke, sizzling meat, and delicate morsels of white rice in a tiny bowl.

After a week or so, when wandering home from a shopping spree at Damas Supermarket, I decided to check out Mr. Pie.

It seemed, however, that this new one was trying to put a different spin on things; on the menu board they showed an assortment of Lebanese pies: beef, spinach, chicken, and cheese (hence the name "Mr. Pie, I concluded). I love Lebanese spinach pies (fatayer) so was mollified that at least I now had a ready source of those. But when I asked the man at the counter for one, I was told that they no longer carried the pies!

So then I got pretty angry. "But why?" I asked. "Your name says "Mr. Pie and BBQ!" "Yeah, I know," he said, "but the pies, they were not selling". So we are going to change the name. Nobody knows what it means. So we are changing it to Shawarma House."

Shawarma House? Boring upon boring! Why not just call it "Shawarma Shawarma" or "Shawarma Blah Blah" and be done with it?

I was sad. The mystery was gone. There was no Korean gentleman dishing up bulgogi or bibimbap. There were no pies. And soon, there would not even be the alluring neon sign left to look upon.

A few weeks later Mr. Pie and BBQ was officially gone, and in its place was a boring red "Shawarma House" sign. I've forgiven the shopkeepers for leading me on, and I have gotten food there a few times (it's only okay - not nearly as good as Shawarma Palace; but then you wouldn't expect a "House" to have as good food as a "Palace", now would you?) but I still mourn the old Mr. Pie & BBQ.

I'm getting over it, though. There are other places to discover, other food shops to explore, and other other foody mysteries to unveil, all along this great avenue called Carling. 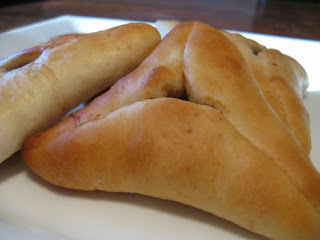 A Lebanese pie (not from Mr. Pie and BBQ!) (source: http://zestycook.com/a-lebanese-treat-fatayer/)