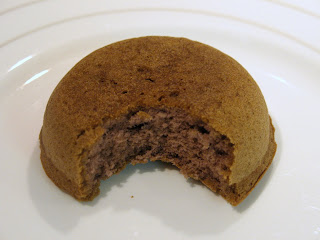 On a cold March day I bundled up my baby, buckled him onto my chest, and headed down Carling Avenue. My destination was Reette’s Foods, a Philipino grocery store located near Carling and Ritchie St. I was in search of ‘coconut bun”, a Philipino white flour treat that I had bought there once before, and for which I had a certain hankering.

You may recall that in my post on chickoos I referred to Sree Fresh Grocery as “unprepossessing.” Well, to call Reette’s Foods unprepossessing would be to pay it a lavish compliment. It is in a small dingy white building with one window boarded up, a weedy maple growing through a crack in the cement, and crumbling steps leading to a barred door. The plain handpainted sign on the building gives no clue as to what kind of foods it sell, and looking at the building you can hardly tell if it is open or abandoned.
Handmade signs in the window list their offerings: goat meat, goat foot, cow foot, king mackerel, tilapia, ox-tail, and so on. For this reason, the first few times I passed by the building I thought it was a butcher’s shop. I am Hindu, so was hardly tempted to step in. While I have no objection to people eating beef, it makes me cringe to see the stuff in its raw form. In fact, I once teased my (Hindu vegetarian) mother in law by telling her I was taking her there to eat (our destination was actually Ceylonta, the Sri Lankan restaurant next door). I think she was horrified to even be standing next to a sign that said “cow foot”!

One day last November, however, I did step in just to see what they sold. To my surprise, it was a well stocked grocery store with a wide array of Asian vegetables, noodles, tinned fruit, lentils, baked goods, candies, and Philipino curry sauces and pastes. And instead of a glass case full of staring red beef parts, all the meats were frozen and discreetly stored in a large freezer. Phewf!

The shopkeeper was a pleasant Philipino lady who was intently watching an evangelical Christian television show when she wasn’t serving customers. The inside of the store was as dingy as the outside, and it had an untidy, disorganized air; but the wealth of exotic food products delighted me (chick peas in syrup! Halo-halo!) I perused all the offerings, recognizing some products I often see at Grace Ottawa, a Philipino-African grocery store downtown.

On this March visit they didn’t have any coconut buns. “My husband will bring some from Toronto next week,” the shopkeeper promised. "Come back next Tuesday." So I had to look for something else to satisfy my sugar fix. There were lots of interesting products there, and, while restraining my baby's little paws from grabbing the glass jars, I also had to restrain myself from buying some weird and wonderful thing that would sit in my cupboards for years before I was forced to throw it away because I had no idea what to do with it. And so I decided to buy some “ube cake”. 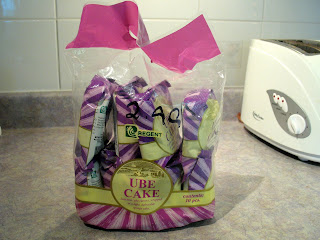 Now, I had no idea what ube was, how it’s used, or where it comes from. But, I reasoned, if it’s in a cake it must be safe, right? It’s not like they would make a cake with something scary like, oh I don’t know, beef bone flavouring or ox-tail icing, would they? And anyway, the picture on the package showed a very normal looking small loaf cake in a pleasant shade of purple.

Further poking around the store revealed packets of “ube sauce” with a picture of a purplish tuber on them. From this I surmised that ube is purple yam, which was a relief. While we in the West tend to eat yams and beans in savoury dishes, in Asia they are just as often eaten sweet in buns, ice cream, shaved ice drinks, and many other weird and wonderful combinations. 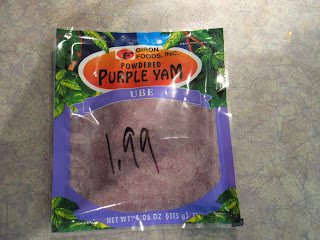 As is my wont, I cracked open the package and started munching as soon as I was out of the door. It was likely baked in some kind of mold, as the outside was brown, while the inside of the cake was a beautiful purple. The cake had a pleasant aroma with a mild sweet taste and a light and airy texture. My baby liked it too, and munched off a piece as we tromped down Carling Avenue in the cold sunshine. Overall it was a pleasant tea cake that I would certainly try again. After all, how often does one get to eat purple cake?

Well, upon later researching ube on the internet I realised that, if you are Philipino, you get to eat purple cake all the time! To my surprise, googling “ube cake” brought up a multitude of photos of lush purple cakes, resplendent with florid purple icing and interspersed with layers of macapuno (young coconut flesh) cream. Wow! How have I lived so much of my life without eating an ube layer cake? Judging from the number and variety of photos, ube chiffon cake seems to be as common as chocolate cake in the Philipines, and probably more so. 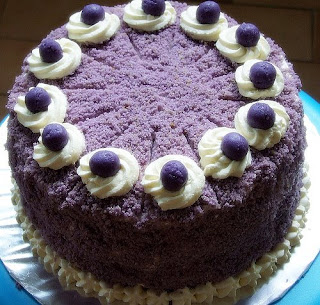 Clearly, I need to find a Philipino friend who will make me an ube cake. Or maybe I’ll just head back to Reette’s, chat with the nice shopkeeper, and get all the ingredients there. Just goes to show – don’t let a store’s exterior fool you!

Update on Reette's: on a recent visit I was pleased to see that the weedy maple had been uprooted and the glass had been replaced in the boarded up window. It turns out that the store is under new management and they plan to rename it "R&V Store", with a nice new painted sign with vegetables on it. So now passers by may actully realise that there is a fun grocery store in their midst!
Posted by Ms. Foodie at 12:15 PM 2 comments: 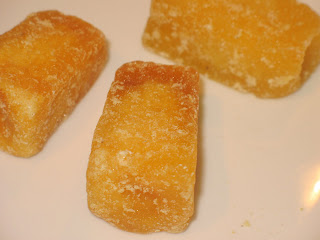 Have you ever crunched into a stalk of fresh sugarcane? If you have, you know how delicious that rush of sugary juice is - fresh and healthy tasting, the best stuff on earth. Now, you might be forgiven for thinking that you'd get a similar rush from sucking on a white sugarcube. Wrong!
White sugar, though so many tasty things are made from it, is bleached and robbed of all its vitamins, nutrients and, yes, flavour. Brown sugar is slightly better, with its more robust flavour, but if you want to eat real sugar, nothing compares to the real stuff - jaggery.
I know you're thinking - awesome name - but what is it? Well, jaggery is the Hindi name for crystallized pure sugar cane juice. That's right - they crush the cane, extract the juice, boil it in big iron pots, pour it into molds where it solidifies and - poof! The finished product is used extensively in Indian cooking (both sweets and savoury items) and in religious rituals (yes, that's how much it's valued). 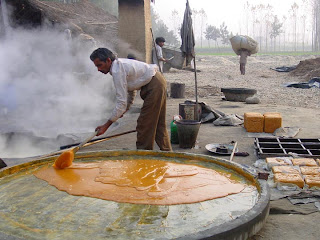 And how is white sugar made? Well, after extracting the juice, chemicals (Calcium carbonate, carbon dioxide, sulfur dioxide, lime,) are added “to trap particulate matter so it can be filtered out”. Then, “the golden liquid is passed through bone char (activated charcoal made from beef bones), which removes the color left by dissolved impurities.” (Sounds yum, no?)

Finally, “the solution is boiled under pressure, crystallized again, centrifuged and tumbled with a flow of hot air in a granulator, from which the final product emerges.” (source: Chesapeake Baby Journal http://www.bayjournal.com/article.cfm?article=1182) If sparkling white sugar isn’t a priority for you, and you’re not crazy about the thought of those charred beef bones, you may think that brown sugar is a better choice. Wrong! “Brown sugar is simple white sugar with a bit of molasses added back in, or coloured with caramel.” (http://www.wholife.com/issues/10_1/02_article.html). Drat.

So what’s a Hindu foodie like moi to do? Munch off some jaggery of course! Actually, my political stance about white sugar is a recent development. When I wandered into Vaishali Superstore the other day, looking for a sugar hit, I was only curious to be reminded of what jaggery tastes like. It was only while doing research for this blog post that I learned about the dark secret behind the sparkling white stuff..

I first tasted jaggery when my mother in law was here after my baby's birth; she used jaggery in her cooking and, sampling some one day, I was blown away by the flavour. Jaggery comes in cones, loaves, and chunks. So, recently, I bought some chunked jaggery, and tried it as soon as I got home. The flavour was just amazing. As it melted in my mouth I could feel the sunshine and the cane leaves rustling. I tell you, dear reader, it was as flavoursome and satisfying as a piece of fudge. 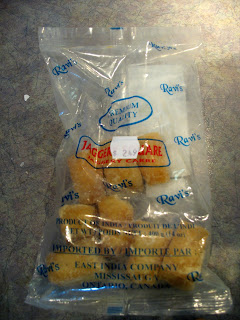 Curious about this wonderful stuff, I did some research about it on the internet. I discovered that, not only is jaggery an important part of Indian cooking, it is also extolled by Ayurvedic medicine as a cure for respiratory and digestive problems. It contains proteins, minerals and vitamins, is a source of iron, and has a higher iron and copper content than white sugar (naturally, cuz those pesky “impurities” haven’t been filtered out yet). Interesting fact: white sugar is 99.5 percent sucrose while jaggery is 65-85% sucrose.

On Western websites, the words used to define jaggery are telling - "coarse", "unrefined". White sugar on the other hand, is "refined" and "pure", with all its "impurities" removed. This says a great deal about the way white sugar is valued over the natural product.

Now, of course, jaggery is still a simple carbohydrate and so should be eaten in moderation. But wouldn’t you rather eat something full of vitamins and nutrients rather than something that has had all its goodness blasted away by chemical treatments, bleach, centrifuging and beef bones? Icky poo.

So over the next few months I will be experimenting with ways to substitute jaggery for white sugar. I will let you know how I do! Until then, I leave you with one delightful way to use jaggery. It’s tasty and good for a cough, cold or when you need some warming. As per my no-recipe policy, it is short: take a big hunk of ginger and grate it. Take three cups of water and a chunk of jaggery and combine everything in a pot. Boil away until the liquid has reduced by about half. Glug it all off (including the grated ginger). Savour.

Update on the beef bone char issue: I checked the websites of the brand of sugar I am currently using (Redpath) and it says that they do not use animal bones for filtering the sugar. Instead they use cloth filters (and they have photos on the site to prove it). Phewf!